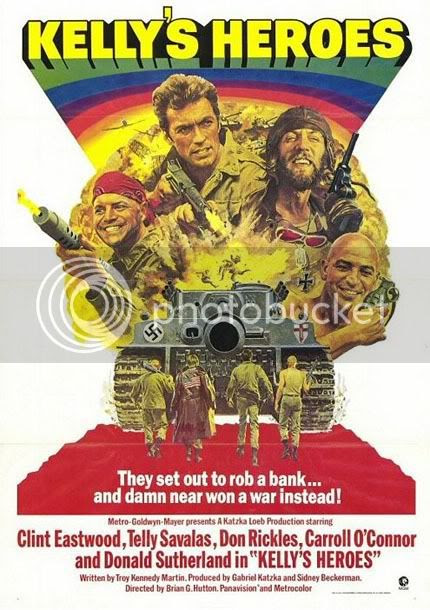 I Watched Kelly’s Heroes last week on the Military Channel, I always loved that movie. If you haven’t seen it, this is the Wikipedia entry for it.

In World War II France in early September 1944, units of the 35th Infantry Division are nearing the town of Nancy when one of the division's platoons receives orders to pull out while under attack from the Germans (much to the dismay of the men, who are eager to get into Nancy in order to find a decent place to get some rest).

Kelly, a former lieutenant who'd been demoted to private as a scapegoat for being given orders to attack the wrong hill and wiping out half a Company of GI's, captures Colonel Dankhopf of German Intelligence. When Kelly notices his prisoner has a gold bar in his briefcase, he gets him drunk to try to get information about the gold. Before he is killed by an attacking German Tiger tank, the drunken Dankhopf blurts out that there is a cache of 14,000 gold bars (worth $16 million) stored in a bank vault 30 miles behind enemy lines in the town of Clermont (most likely Clermont-en-Argonne).

Kelly recruits the rest of his platoon, including skeptical Master Sergeant "Big Joe", to sneak off and steal it. Eventually, others have to be recruited (or invite themselves) into the scheme, such as an opportunistic supply sergeant "Crapgame"; a proto-beatnik Sherman tank commander, "Oddball"; and a number of stereotypical G.I.s presented as competent, but war-weary veterans who are as much fed up with their incompetent or self-serving superiors as they are with the Germans.

The expedition successfully breaks through a German held town during a mortar barrage that has been arranged by Kelly. They then meet bad fortune when an American fighter plane mistakes Kelly's group for the enemy, shooting up their vehicles and destroying them with rockets. They continue on foot and one of them dies in a minefield. Two others of their number then die in a battle on the minefield.

Meanwhile Oddball's tanks head along a railway line wiping out a German depot along the way, but their route is blocked when the last large bridge to Clermont is blown up by Allied bombers, prompting Oddball to let a bridge engineering unit in on the deal. When intercepted radio messages of the private raid are brought to the attention of gung-ho American Major General Colt, he misinterprets them as the efforts of aggressive patriots pushing forward on their own initiative and immediately rushes to the front line to exploit the "breakthrough".

Kelly's men race to reach the French town before their own army. There, they find it defended by three formidable Tiger I tanks with infantry support. The Americans are able to dispatch two of the Tigers and most if not all of the supporting German infantry. However, as they prepare to take on the last tank, which is parked right in front of the bank, Oddball's last Sherman breaks down, and it is found that the Sherman cannot be repaired due to a lack of needed replacement parts.
Powerless to defeat the heavily-armored behemoth, Kelly, Oddball and Big Joe square up like western gunfighters and walk purposefully in line towards it, prompting the commander to emerge from the turret. He and his crew are then offered a share of the loot, the tank blows the bank doors off and they divide up the gold ($875,000 per share).

They then go their separate ways, just managing to avoid meeting the still-oblivious Colt, who is delayed when the celebrating town residents are told he is Charles de Gaulle. Oddball and his crew ride out of town in a Tiger tank and SS uniforms, having used part of their share of the gold to buy them from the Germans. Kelly and his misfit heroes head off into the sunset, presumably en route to Switzerland where they can sit out the war and rest on the joys of numbered accounts.

I made a note years ago about writing a D&D scenario that would put an adventuring party in a Kelly’s Heroes type situation during the Greyhawk Wars, but I never went any farther with it.

The thing with setting up a D&D game around the plot of a movie is that it’s very difficult to replicate events without turning the game into a railroad. I really do not care for those. Railroad games just suck all the tension out of play.

So, I like to set up situations that will likely replicate the general feel of the movie and the pace of its events, but don’t require the PCs perform a pre written pantomime of the movie in order to progress.

I was thinking for the Greyhawk’s Heroes scenario, I’d have the PCs be impressed into the armies of Furyondy at the beginning of the war. Wyrd Greyhawk’s PCs aren’t normally Heroic Fantasy material. They tend to be hardscrabble, average Joes getting by on guts and black humor. Getting press ganged into a conflict between great uncaring powers would be par for the course.

The PCs would be in the position of Kelly and his platoon, while I’d have NPCs for the Big Joe, Crapgame, and Oddball analogue characters.

Looking for a good encampment spot, the PCs encounter a spy/courier of Iuz. The spy has a bag of gold coins and information on just where, thirty miles beyond the battle front, a great horde of looted treasure has been hidden for later shipment to Dorraka.

Of course the PCs want it. Risk your life for a fortune, or risk it for ten silvers a month and disciplinary beatings once a week, plus the chance of encampment cholera and being hacked to death by orcs, which would you, choose?

The game would be an overland hexcrawl through war torn territory and no man’s land, towns held by the forces of Iuz, scarred lands, and wild countryside. The PCs would have to avoid combat wherever possible in order to draw the least amount of attention to themselves if they want to have any chance of reaching their goal.

One of the best parts of the movie was that, in order to solve problems as they went along, Kelly’s Heroes had to keep enlisting the help of more and more other people, who in turn drew the attention, and greed, of still more people. Eventually, the allied command gets drawn into it and the movie becomes a race to reach the gold and escape before the whole U.S. army follows them to Clermont.

To mimic this, I’d add the Notoriety rules from the Dorrakka, City of Skulls module TSR put out for the Greyhawk Wars. (I can’t find my copy at the moment, so I don’t have the module number).

The notoriety rules are a system whereby the PCs accumulate points for high profile actions. As these points accumulate, they draw the attention of various other actors in the module, resulting in them taking appropriate actions of their own. Such as investigating, pursuing, etc…

I’d do the same thing, with PCs actions gaining them notoriety points as they progress, and these points gaining them first the attention of low level Furyondian officers, and then higher and higher up the chain of command as the PCs incurred more points.

If the PCs are clever and circumspect, they might make it all the way to the horde without drawing too much attention. If not, the Furyondian army might make it there right alongside them.

Once Kelly’s Heroes made it to Clermont, they had to deal with a squadron of three Tiger tanks guarding the gold. They knocked out two with surprise and maneuver, and then made a deal with the Commander of the remaining Tiger for a share of the gold.

To have a chance of a similar situation playing out in the game, I’d have to have a suitable foe in the destination village that couldn’t be defeated directly at first, but might be amenable to parley if placed in the weaker position.

I haven’t decided what that foe should be. A trio of young dragons under the domination of Iuz? Impressed former Shieldlander knights? Heavy armored elite hobgoblins? Devils? I’ve got to muse on that a bit yet. 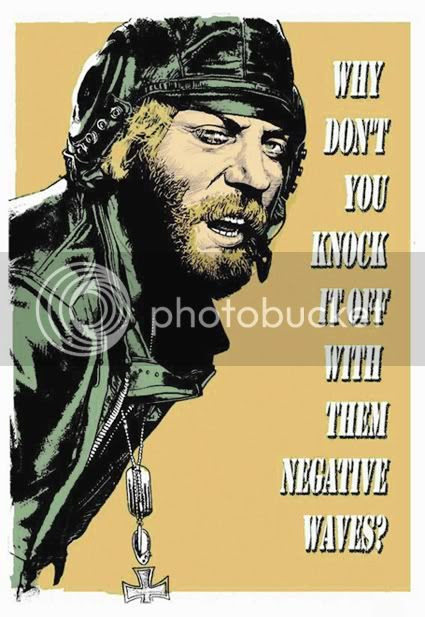 Big Joe would be a Serjeant of Furyondal heavy foot the PCs would have to convince to go along with the plan. No rolling for it, I’d make the players role play it out with “Beegjoh” .

Crapgame would be a Provisioner , charged with securing supplies for the Furyondians. He’d also have thieves’ guild connections and many friends in low places. I might just call him,”Crapper”.

Oddball would be Sir Ohe DeBal, a Furyondian knight of petty nobility with a small squadron of chivalric heavy horse. For Wyrd Greyhawk, a fully armed and armored knight is the best analogue for a tank. 1600 lbs of horse, man, and iron isn’t something any spear pusher wants to get in the way of.

I’d play each of these NPCs just as their actors did in the movie, Telly Savalas for Beegjoh, Don Rickles for Crapper, and Donald Sutherland for Sir Ohe De Bal. Imagine Sutherland in wine stained armor as a black lotus smoking beatnik knight of Fortune.

“Ceaseth thou with thyne negative emanations, Sirrah! If thou dost believe the bridge shall be there, then so it shall!”

This is all I’ve written about the idea. If I do ever pull it together and run it, I’ll let you know how it plays out. If you do it, let me know how it goes. Game on!
Posted by E.G.Palmer at 10:01 AM

You just made one of my favorite movies even better. I had actually tried to think of how to get some D&D type content from the events of the movie but came up with nothing. Your ideas are great and I think they could work very well. I am seriously considering running this.

Thanks,Pierce! Let me know how things go. I'll do a follow up post when some more ideas come to me.

I keep wanting to do this with a Star Wars game.

I would play the hell out of that scenario. Thinking of other games, it would be perfect for WFRP. But now I'm thinking of Tekumel. YES! A small company of misfits, scoundrels and eccentrics, deep behind Yan Koryani lines...

One of my favorite non-westerns with Clint. I like the idea of using it for a campaign.