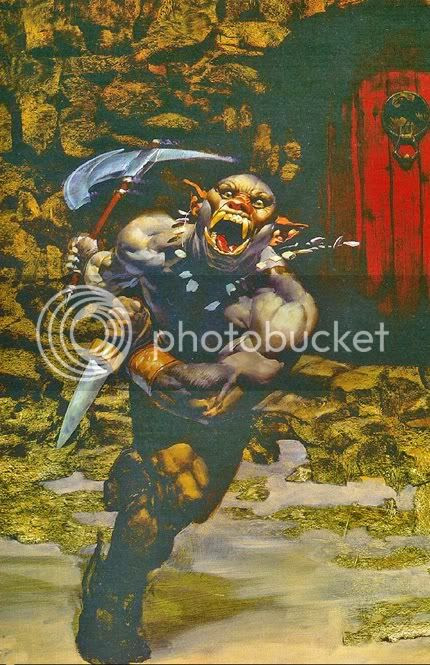 The Scorned Blade is the chosen name of an adventuring company composed entirely of renegade and outcast humanoids. Lead by the hobgoblin Zarkutz, the Scorned Blade includes, two orcs, Grum and Cazag, a bugbear, Grug, three goblins, Snool, Bugum, and Pulc, and a gnoll called Hykic.

All are exiles, or outcasts from their tribes for one reason or another. This unsavory group is held together by the iron will and discipline of Zarkutz, that plus mutual need, and the fact that no one else will accept them. They are more than a match for the average party of low level characters because they work as a team and use every dirty trick they can muster.

Ambushing travelers has been their bread and butter, but Zarkutz entertains grim dreams of making a name for himself as human adventurers do, and returning in glory to revenge himself on those who forced him from the tribe.

To this end, he gathers what information he can in regards to lost treasures and magic. He also looks for the chance to capture alive any adventurers that may be able to teach skills that the Scorned Blade lacks. Zarkutz especially wants a thief to teach the goblins, and a magic-user to tutor Kazag.

Having lost a power play within his tribe, Zarkutz was exiled with dishonor. The hobgoblin lusts for command and forged the Scorned Blade from other outcast humanoids he encountered simply to have something to lead.

He speaks common very well, and will be interested in talking with any player character party that doesn’t attack immediately. At least, any party he can't over come easily.

He will be willing to ally with adventurers if it is advantageous, and will adhere to the letter of any agreement made.

Zarkutz will attempt to impress the members of a weak party into the Scorned Blade if he can dominate them. He will, at the least, quickly begin issuing orders to any indecisive appearing allies.

Grug is very large for a bugbear. He is most enthusiastic, and not overly intelligent. Despite his chaotic nature, he applies himself to the strict lessons of Zarkutz, and as a result, he has become both a skillful and an erratic opponent.

If faced with multiple attackers, Grug's first attack will be to bash the closest target with his shield. Opponents of lesser mass must Save VS Crushing Blow or be knocked down, requiring two rounds to get back up.
Grug will use this time to attack the next closest target.

A fanatic devotee of Baghrutu, Grum was driven out of his tribe by the dominant followers of Grumsh for the crime of heresy.
He wears studded leather, and fights hand to hand with gauntlets of ogre power, (18/00 str, +3 to hit, +6 dmg).

Grum will attempt to convert captured opponents to the worship of Baghrutu. He is passionate, but not eloquent.

His favored method of attack is to blind his opponent with his light spell, and then close to pummel with his iron gauntlets.

He would like to challenge Zarkutz for leadership, but secretly fears the ruthless hobgoblin.

Not brutal enough to live among orcs, yet not sensitive enough to live with humans, Kazag is selfish, unpleasant, weak willed, and greedy. He directs his spells as commanded by Zarkutz, but will never expose himself to direct attack. He is not to be trusted, and Zarkutz makes sure the goblins always accompany him. They serve as both protectors, and minders.

Kazag carries a dagger coated with golden adder venom, Save or suffer agonizing hallucinations for 1d4 days which completely incapacitate the victim.

Large for goblins, these three are brothers who were cast out for the pleasure murder of prisoners which their chief had intended to ransom.

Scouts and skirmishers, they will close for combat only if ordered by Zarkutz. Each carries four javelins, short swords and shields, and wears studded leather armor.

If the Scorned Blade should manage to capture a thief, Zarkutz intends to force him to teach the goblins his skills.

There is a strong possibility that Hykic is mad. His sharp barking laugh, which seems to come at random moments, is irritating. He was driven from his clan for, "unwarranted cannibalism".
He is ferocious and reckless in combat, and Zarkutz employees him as a shock trooper to terrify and to herd targets into advantageous positions. He is without fear but obeys Zarkutz for reasons of his own.

Hykic wears armor of horn, leather and metal, and carries a long sword and a halberd.

Mally is a slave and cook to the Scorned Blade. Her ability to turn odds and ends into good food is what saved her life when her traveling party was ambushed. The humanoids had never had cooking of such flavor, and Zarkutz knows a fighting force moves on its stomach.

Hykic would like to eat her, and the goblins would enjoy murdering her, but the bugbear Grug considers her his pet, and to Zarkutz she is a tool to keep the group together.


The Scorned Blade is only slightly above the average of humanoid combatants statistically. The thing that makes them dangerous is the fact that they fight as would a well disciplined human adventuring party.

Zarkutz always attacks, and opens negotiations from a position of strength. He will not commit to a combat that he isn’t very sure of winning. There must also be a definite goal, or prize involved. Though, of course, he enjoys fighting as much as any hobgoblin, Zarkutz has priorities, and is not easily dissuaded.

If the Scorned Blade becomes aware of a PC party before the PCs are aware of them, Zarkutz will first determine the strength of possible foes, or new recruits, and then determine a course of action.

If the PCs are obviously too strong for the Scorned Blade, Zarkutz may either avoid them completely, or begin to shadow them, waiting for an opportunity to present itself.

If the PCs are judged to be on close to equal footing with the members of the Blade, Zarkutz will offer a truce, he speaks common quite well. The hobgoblin will use any conference to gather information about the party and its purpose. If the party is competent and willing, and there is gain in it, Zarkutz may offer an alliance of convenience, for a time. Treachery is possible if the information leads him to reevaluate his first assessment of the PCs. He will, however, abide by the letter of any deal or agreement arrived at in negotiation.

If the PCs are judged to be weak or at a disadvantage, then Zarkutz will most likely attack. Any useful survivors will find themselves conscripted into the Scorned Blade.

If the Scorned Blade attacks with Surprise, or otherwise gets to make the first move, they are coordinated and business like.

The goblins will hurl javelins from a distance, choosing unarmored targets such as magic-users first, clerics second. Grum and Kazgag will cast spells to cause confusion and damage from a distance, before Hykic, Grug, and Zarkutz move in to attack any obvious fighters. Grum will close to attack after expending his magic. Snool, Bugum, and Poolc will move in to melee once they have expended their missile weapons. They much prefer to gang up on a single, wounded opponent if possible.

Zarkutz directs the actions of the others and they obey him without question, at least during combat.

If the melee goes poorly, Zarkutz will order a withdrawal. If Zarkutz is himself killed, the others will flee. 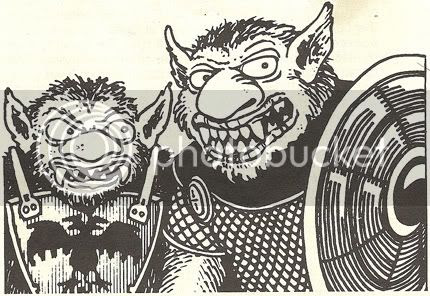 This is a version of an NPC party I sent James at Grognardia for his MegaDungeon project a while back. I’m pretty sure that's dead in the water now, so I thought I’d share it with my blog buddies. You can, of course, easily up rate the Scorned Blade for higher level play. I made them with the intention of providing a thorny problem for experienced players running low level characters.

I think that’s about my favorite gaming scenario. Very good players running low to mid level characters who have to make do with what they’ve got. It just seems to have more juice to it, there’s more at stake somehow. High level play feels a bit too super hero-y to me for D&D.

Not that I don’t love super hero rpgs, mind you. I’ll have to tell you about the time we demolished most of downtown Indianapolis in a brawl with A.I.M. I guess I just don’t like peanut butter in my chocolate.

The top pic is cropped and lightened from the TSR Book of Humanoids, done by Sam Rackland I believe. I like it a lot, it illustrates why Old Schoolers know not to mock the single orc guarding a door.

This is really cool. Thanks for sharing.

We captured a hobgoblin once, as 2nd level characters, and tried to get him to fall in with us. The darned Evil thing kept getting in the way. :)

Is that Erol Otus art?
--Looks a bit like DAT or DSL stuff.

Totally snagging this for my megadungeon!

Hmmm, I'll have to double check that, Timeshadows. It could be D.A.T, possibly, by the shading. I've always assumed it was Otus due to the mad toothyness.
We should ask Jeff Rients.

(It's DAT from D1 or D2 - I forget which)
Dammit EG! Your signal/noise ration is tipping dangerously toward 'quality overload'!