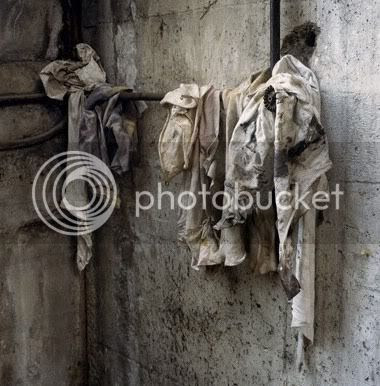 Never dungeoneer without your oily rag.

Among the many uses of this inexpensive and over looked, but vital piece of equipment are;

The oily rag is an excellent way of protecting metal and leather from corrosion and damp. In areas of high humidity, especially salt mist or other rust promoting conditions, a daily wipe down with an oily rag will prevent mail from rusting, bowstrings from stretching, leather goods from distorting, etc…

Such considerations may be something hand waved by many Dungeon Masters, I however, am not one of them. Tee-hee! Well oiled mail is quiet and moves smoothly, rusty mail makes more noise and can constrain movement. If characters take no care of their equipment for enough time, those wearing armor may incur penalties regarding surprise and movement in melee. A bow string or crossbow cord stretched by moisture will cause significant penalties to hit and damage.

An oily rag can be used to leave directional marks when adventuring underground. An oily smear is less obtrusive than paint or pigments and can be left silently. Marking with a chisel or nail may make noise which draws unwanted attention. This method is especially recommended for use by a thief scouting ahead of the party.

An oily rag is handy to wipe the dust and grime of centuries from ancient carvings and runes. A clean inscription lessens the chance of mis-interpretation, as can sometimes happen.

An oily rag wrapped around the end of a sword sheath can serve as a makeshift torch in time of emergency. They also serve well as a fuse to light oil, explosives, or tapestries. I roll a D10 to get the number of rounds an improvised oily rag fuse will burn before setting alight whatever its been attached to.

An oily rag may be thrown or tossed, preferably afire, to gain a single round distraction from opponents of average or below intelligence.

A particularly oily rag may be laid where it will likely be stepped on as a trap. On the edges of precipices or on the third step from the top of a stairwell. The unsuspecting can easily slip on it with possibly serious consequences. My players call this, “the dungeon banana gag”.

Likewise, an oily rag can be used to leave a film of grease or oil on door handles, rings, or knobs. Those who are unaware of the lubricant will always fail their first attempt to turn the knob or handle. This fumble may be heard by the party and give them just enough time to prepare for their entrance. Unfortunately, clever monsters may also use this tactic.

Finally, an oily rag tied over the mouth and nostrils will prevent the inhalation of airborne mold spores, but not magic effects such as a stinking cloud.

As a DM I like to reward ingenuity in problem solving by players. I think that’s one of the most rewarding parts of actual play. When something comes right out of the blue that I hadn’t expected and changes the direction of the game, I can be downright gleeful. I find I like surprises and the random unexpected a lot more now than I did as a kid. Even when my finely tuned and thought out encounter is defeated by the offhand gonzo use of an oily rag.

Let the dice fall where they may!
Posted by E.G.Palmer at 6:55 PM

In all my years of gaming...

I am instituting the oily rag rule, effective my next gaming session.

Price, weight in stone, and stowage stats in all of the Clone rules sets stats, please.

I was working on that,TS, but I slipped on something, fell down the stairs, and the dog ate my notes.
C'est la D&D.

This needs to be a series.

That's my intention,-C. Of course, good intentions, road to hell and all that...

What great insights into such a mundane object!

Cost up "oiled cloth" for the shop, stat!