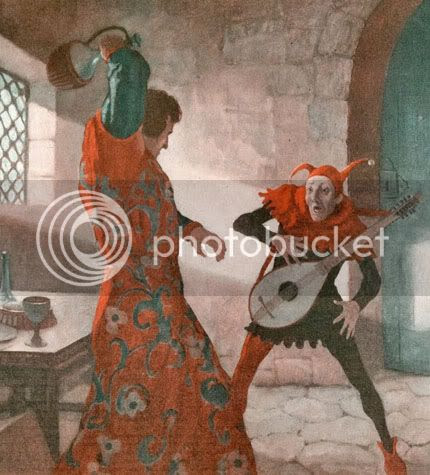 In melee combat, characters expending all their efforts in avoiding incoming attacks, rather than striking back when they have the opportunity, may gain an Armor Class bonus depending upon circumstances.

This bonus is applicable in situations where an unarmed PC is stalling for time to be rescued from attack, or in cases where the PC doesn’t actually wish to harm his attacker, such as when the attacker is a comrade who is being controlled magically or otherwise, by outside forces.

The amount of the bonus, and the way it is administered is left to the DM.

It may take the form of requiring the attacker to roll twice for each attack, and taking the lower number, thus increasing the chance of a miss. Or, the defender’s Dexterity bonus may be doubled, assuming the PC has one. Or, a simple +1, +2, etc, could be awarded to the AC of the combat shirker based upon the level of desperation the DM reads in the Player’s face.

Thieves, for whom the avoidance of combat is second nature, and Friars for whom physical adeptness is a practiced discipline, always have a base +1 Combat Avoidance Bonus in applicable situations, to which bonuses determined by any other method are added.
------------------------

I haven't been here on the bliggety-blog much in the last month. My internet connection became so unstable it was just about impossible to post anything or visit any of the sites I like. As it turns out, apparently the culprit was Trillian. It seems to have gotten jammed halfway through an update. It's straightened out now and seems to work fine as far as I can tell.

I've also spent alot of time clearing the dead trees out of the woods and turning them into firewood. The damn emerald ash borers have killed most of the ash trees and I'm going to have to replace them. I'm very interested in permaculture, so It's going to be mostly fruit and nut trees that will work in a semi open forest setting that I'll be looking into. We'll have to have something to eat when that moron Bernanke collapses the dollar.
Posted by E.G.Palmer at 5:34 PM

I've felt that the bonus aspect of foregoing an attack is on the low-end of the spectrum. In a D&D setting, it could be a bonus equal to half the character's level, minimum of 1.

I know most systems use this same type of bonus if the target is just dodging and not attacking, is a +2 to AC. It's one I use, but if a player can come up with some reason why it would be increased I am always willing to hear.