Be not slovenly in the Art, lad. Lest ye call forth the Catarrhapillar! 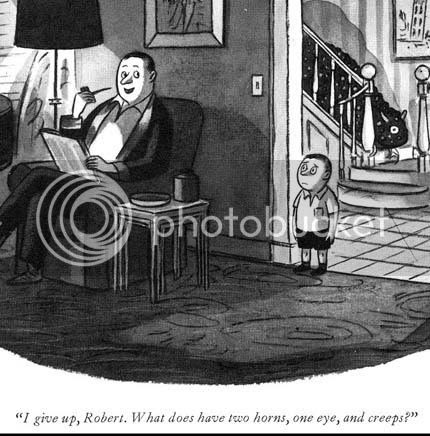 When an attempt to summon and bind an infernal being of whatever sort fails badly, there is a chance, the magnitude of which depends upon various factors, that the imperfect summoning will call forth a Catarrhapillar, rather than the intended target.

This unfortunate happenstance is one reason among many for the mania would be diabolists have for attention to detail in their work, and with good reason.
A catarrhapillar, (or the catarrhapillar, it is unknown if the creature is singular, or of a kind), appears as a gigantic, demonic caterpillar-like beast. It has a broad, but shallow mouth filled with sharkish teeth, a single great baleful eye, and small horns or like protrusions upon its head.

The creature moves slowly, but with power. The rolling crepuscular undulation of its log thick body of fiendish muscle gives it strength equal to that of a stone giant when it comes to dealing with doors or other obstructions.

At all times the creature is enshrouded within a vile atmospheric exudation which it emits from its body. This is the catarrhal miasma. Any creature which comes within 1”, (10 feet), of the catarrhapillar must Save VS Poison or else suffer its effects. The miasma causes severe inflammation of the lungs and sinuses, as well as burning of the eyes and racking coughs. The weakness and heaving spasms effectively reduce the victim’s movement rate by 50% until he has been clear of the catarrhal miasma for 10 rounds.

In addition, the, (or a), catarrhapillar constantly emits the mewling. The mewling is a cry which sounds as though it were coming from a fearful infant calling for its mother, or the cries of abandoned kittens. All who hear the mewling and witness its actual source must Save VS Magic or feel Fear as per the spell.

Once brought to the prime material plane, a catarrhapillar has no goal other than to devour its summoner. It will ignore all other threats unless they come between it and its target. The creature is untiring and unrelenting. It will pursue its summoner without pause regardless of distance or obstacles. Even should a summoner remove himself from the catarrhapillar’s presence by teleportation or dimension door or other such magic, the monster will still sense the caster’s direction and distance and pursue at its best speed.

A catarrhapillar cannot be held or charmed or controlled in any way.

I've been slow to post lately. It's because allergies make me stupid. I'm outside alot, and once I suck in that late summer pollen, I get dumber and dumber as the day goes on. I just can't seem to focus well enough to string words together.
If I take enough antihistamines to clear my head, I get that weird detached feeling of watching everything through camera eyes instead. I'm sure everybody at work thinks I'm high. Ah,well.

The pic is a clip from an Adams family cartoon. That thing creeping down the stairs just stuck in my imagination.

I wanted some sort of low level, but terrifying demonic creature. The idea with the catarrhapillar is have something that will evoke that fear of relentless pursuit you get in those dreams where you fall down a lot while being slowly chased by something horrible.
Posted by E.G.Palmer at 6:53 PM

Am I missing something or does this thing not have hit dice?

Where'd you find that toon? :)

Back in the day, we didn't have hit dice. You had to kill monsters using player skill.

Kids these days, what with their fixation on hit dice.

Great jumping Gygax on a pogo stick! I forgot the hit dice! Since I've already established pollen as the villan here in my lessened mental capacity, lets agree to place the blame there.

Of course, I could go with Paladin's idea. "What do you mean, hit dice? all monsters are fiat monsters! just keep hacking, I'll decide if it dies or not."