Three Griffons, to kill your players. 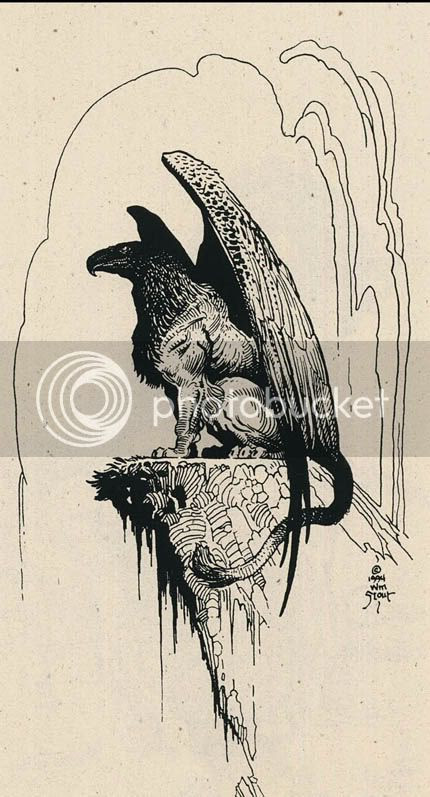 The Black Griffon of the Drachensgrabs.

Frequency: Unique
No. Appearing: 1
Armor Class: 1
Move: 12”/330”, (120 feet per round on foot/330 feet per round in the air)
Hit Dice: 14, (112 hit points)
% in lair: 25%
Treasure Type: Special
No. of Attacks: 3
Damage/Attack: 2-16/2-16/2-20
Special Attacks: Scream of Battle, three times per day, the griffon’s scream will force all who hear it to Save VS Breath Weapon or immediately fumble their next action in fear.
Special Defenses: The griffon’s wings make no sound, it’s passage will not be noted if the creature is not seen.
Magic Resistance: 50%
Intelligence: Uncertain, accounts vary.
Alignment: Lawful Neutral
Size: L
Psionic ability: Nil

Said to be more than twice the size of other known griffons, the great Black Griffon of the Drachensgrab Mountains is held by many to be a harbinger of disaster, its appearance an omen of coming events both terrible and important.

One week prior to the battle of Splintered Oaks, the Black Griffon was reported to have dropped without warning from a clear blue sky to slay and devour the favored war horse of Glewning, Duke of Dweryn. The death of Glewning, and the ruin of his House in the aftermath of his loss beneath the Splintered Oaks was later said to have been foreshadowed by the actions of the Black Griffon.

Some hold it was the griffon laid a curse upon Glewning and his kin by its actions, others that the beast was but an omen sent by the Fates, or Istus, like the dreaded Black Dog.

Some hold that it was merely chance, or perhaps an unfathomable jest of Zagig.

Many words have been spent beside late night watch fires in argument over the nature of the Black Griffon. Little of worth has been gained.

Certainly, the beast is a terrible opponent to face in combat. Upon this, all accounts do agree.
Even the most faithful of war horses will refuse to bear their riders within reach of the Black Griffon’s scythe-like talons.

Pladothemed the Infirm conjectures that the beast has a secret purpose. He has charted the sightings and the reported encounters with the Black, and believes that a pattern may be discerned in its movements. The Trembling wizard avows that the griffon wings forth to various places upon the Oerth in accordance to the arrival of certain dates of arcane relevance as noted in the common calendar of the Flaness.
The accuracy of Pladothemed’s theory is contested, however, as he refuses to reveal more.

Aclamng of Dyvers dismisses him as slovenly in his art, and as, “A senile fondler of Halflings!”

Tales concerning the Black Griffon are often contradictory regarding its behavior. Some have painted the creature as a benefactor of lost souls and a guardian of travelers, while others depict it as a remorseless killer with a cruel and malign humor. The truth may only be discovered by those who venture to seek the creature amongst the rocky spires of its home. 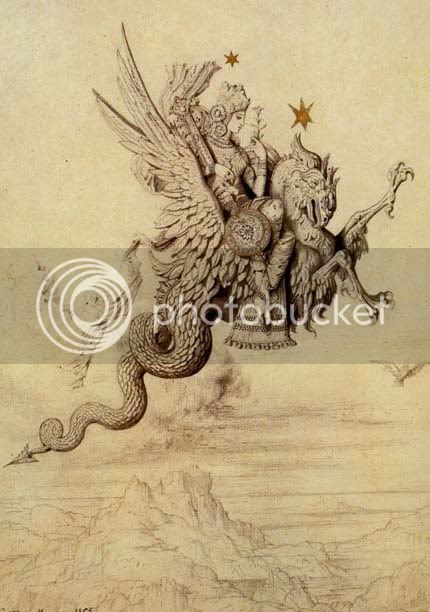 A griffon of this sort possesses the body and tail of a giant serpent, rather than that of a lion, after its eagle’s head, taloned forelegs, and sweeping wings.

Less often encountered than their cousins of the leonine type, they are more likely to be found serving as mounts or guardians than as free wild creatures. A serpentine griffon is at best an untrustworthy servitor, however. It requires constant reminders of its master’s power and will or else it is likely to indulge its own appetites at any opportunity.

Serpentine griffons are more commonly encountered in warm or southern regions. The lair of a serpentine griffon, if it is of their own choosing, will be a location that allows ample sunlight for basking, preferably on rock. They do not seek the heights to nest as do other griffons.

A serpentine griffon left to its own devices is likely to act in a manner similar to that of a dragon. It will find a lair to its liking and then demand food and tribute of passersby and the local inhabitants of the area.

Lean and tawny hunters, Griffhounds combine the features of hawks and coursing dogs as griffons do with those of eagles and lions.
Wingless, but with the head and clawed forelegs of a huge golden hawk and the body and haunches of a great sight hound, griffhounds hunt open land in small packs.
Griffhounds may be encountered in areas of savanna, steppe, desert, or other open range or grassland.

The creatures habitually lair atop the highest point of land within their range of vision. This extends for miles due to the keen sight of their hawk eyes.

The tremendous speed and great stamina they possess enables them to run down most any creature they choose as prey. The pack normally hunts by chasing the prey until it begins to tire. Each griffhound then makes a pass at the prey, slashing or biting on their way by. They continue to attack in rotation without stopping until the target falls. Their superior speed leaves very little time for the prey to strike back before the griffhound is out of reach. (-2 to hit penalty to those attempting to defend against griffhounds which have room to employ their running attack)

Griffhounds are roughly equal in size to the largest normal wolves, and while they are unlikely to attack humans or humanoids unless desperate, trapped or very hungry, once combat has begun they are fearless and need never check morale.

Though it would seem likely that griffhounds were at some point creatures created by deliberate magic, they are quite successful in their role as predators of open land and behave as natural animals.

As the only sort of griffonish beast which may be truly trust worthy when taken as a pup and well trained, perhaps due to its canine half, it goes without saying that griffhound eggs will fetch a good price if offered to the correct buyer.
Posted by E.G.Palmer at 7:56 PM

Excellent creatures all and love that William Stout piece.